A Look Back: Child's Play 2 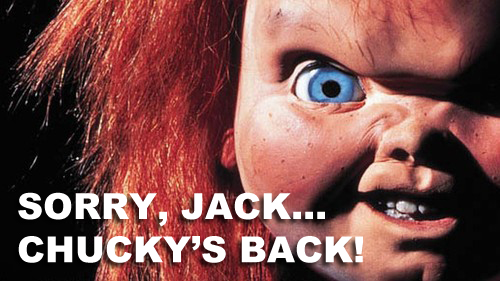 With the trailer for "Curse of Chucky" being released a couple days ago, I thought it'd be fun to look back at the first sequel in the franchise. And, you know, reminisce a little...

Released 2 years after the original in 1990, "Child's Play 2" marked the return of Chucky (voiced again by Brad Dourif), the killer doll possessed by the soul of serial killer Charles Lee Ray. The film picks up at the Good Guy doll factory, where a team of Good Guy engineers are attempting to reassemble the burnt remains of the doll known as Chucky.

With Chucky now resurrected in a Frankenstein-type deal, and young survivor Andy Barclay (played again by the terrific Alex Vincent) going through counseling sessions after the events of the first film, the stage is set for a nice reunion for the two. After all, the Chuckster only has a very limited amount of time to get his soul passed into the body of Andy before he completely turns human (in a doll's body).

We are brought back into Andy's life just as he is taken into Foster care; It's briefly explained that his mother, played by Catehrine Hicks in the original, has been institutionalized (as she is the only person to back-up her son's claims of a killer doll). It takes Chucky virtually no time at all to track down Andy's whereabouts. And to Chucky's fortunate surprise, he sees that there is already another Good Guy doll in the household named Tommy, so a quick switch-a-roo is in order.

Andy soon realizes that Tommy is, in fact, Chucky. Waking up tied to the bed with a sock stuffed in your mouth would not be the best way to find this out, though. Now enter Kyle, Andy's older Foster sister. Just as Chucky has Andy right where he wants him, Kyle comes sneaking through the window. And just the first go-around, no one believes Andy's claims that the doll is alive and wants to take over his soul. Would you believe that?

After a series of gruesome murders, and only Andy and Kyle left standing (Kyle of which now believing Chucky is alive), the film's climax reaches the Good Guy factory where all hell breaks loose.

At the time, it was to be their final showdown, and surely did not disappoint.

When approaching "Child's Play 2", one can only wonder how a sequel to a movie about a killer doll could work. Well hats off to director John Lafia and writer-creator Don Mancini, as they have a successful sequel on their hands. This time around, Chucky was meaner, nastier and all around a better bad guy. And not to mention funnier, which would prove to be the series' downfall later on down the road (see "Bride of Chucky" and "Seed of Chucky").

I have come to learn that everyone has different interpretations of the "Child's Play" franchise. What is yours? How has the series put a lasting affect on you, if any?