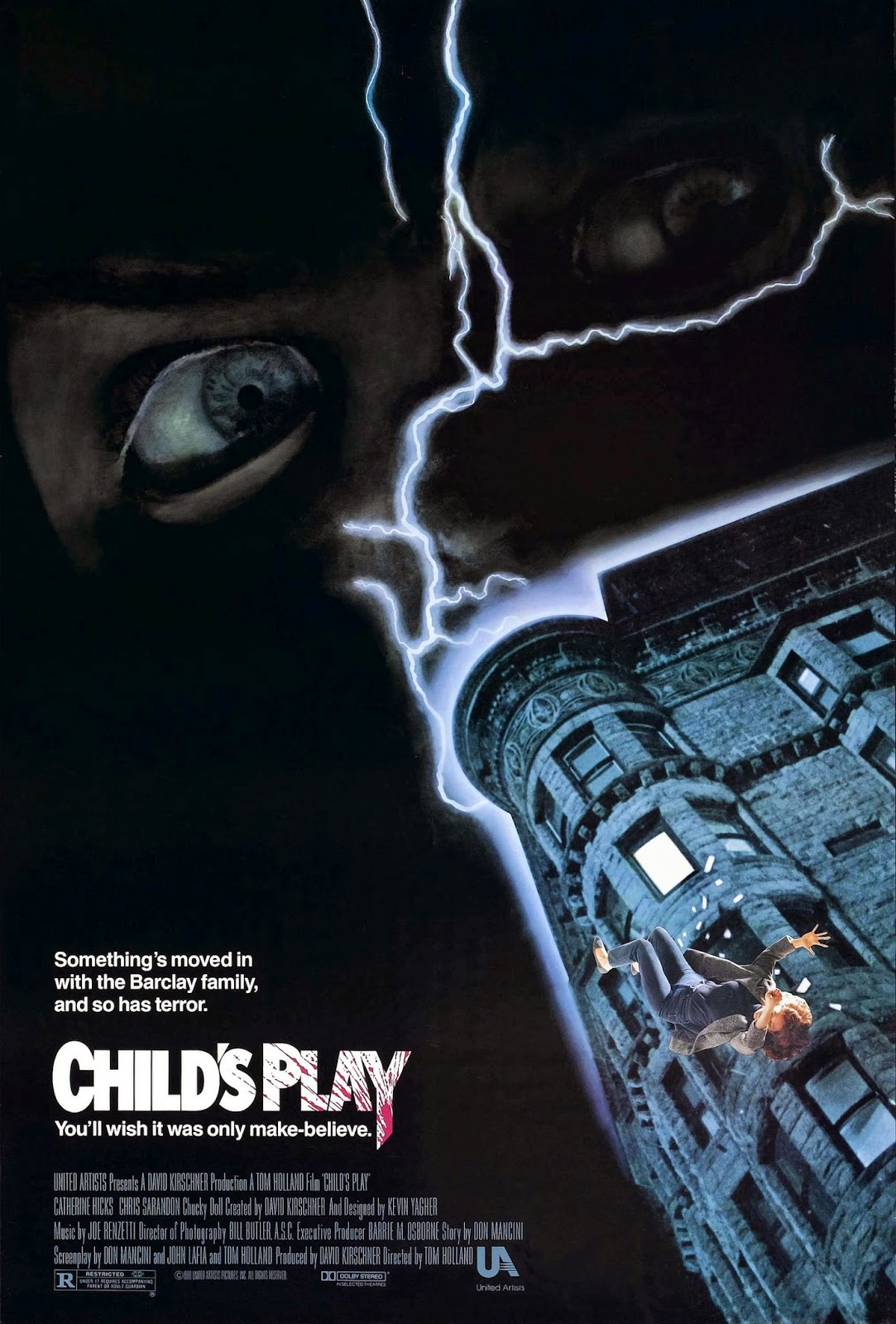 On the morning of November 9, 1988 in Chicago, Illinois, while being chased by Detective Mike Norris (Chris Sarandon), Charles Lee Ray, a serial killer known as "The Lakeshore Strangler" (Brad Dourif), is shot and mortally wounded. Before dying, Charles takes cover inside a toy store, finding boxes of talking "Good Guy" dolls and then uses a voodoo ritual to transfer his soul into one of the dolls. The store is then struck by lightning and it burns to the ground.

Later that morning, 6-year-old Andy Barclay (Alex Vincent) tells his widowed mother Karen Barclay (Catherine Hicks) that he wants a Good Guy doll for his birthday. Unable to afford the full price, Karen buys a stolen doll from a street peddler, which is the same doll into which Charles Lee Ray had earlier transferred his soul.

That night, as Andy is playing with the doll who has introduced himself as "Chucky" Karen's friend, Maggie Peterson (Dinah Manoff), who is babysitting Andy, scolds him for turning on the evening news and placing Chucky in front of the TV. When Andy tries to deny the accusation, she doesn't believe him and sends him to bed. Maggie is later violently struck with a hammer by an unseen figure and falls out of the apartment kitchen window to her death. Andy, when questioned, insists that Chucky has revealed himself to be alive and that he killed Maggie.

The next day, Andy visits the house of Eddie Caputo (Neil Giuntoli), Charles Lee Ray's accomplice, who had betrayed him. Chucky sneaks into Eddie's house and blows out the pilot light on the stove and turns up the gas. Eddie discovers Chucky is alive and, in panicked self-defense, fires his gun and the house explodes, killing him.

Authorities place Andy in a psychiatric ward after he is found near the crime scene. Karen discovers Andy was telling the truth after discovering that the included batteries in the Good Guy doll box were never put inside Chucky. After threatening to throw him in the fireplace, Chucky comes alive in her hands, bites her and runs out of the apartment. She contacts Detective Norris, who is now investigating Maggie's death. Although he initially doubts her story, the homeless man who sold Karen the doll confirms that he retrieved it from the burnt down toy store where Charles Lee Ray was killed. Norris becomes a believer after he is attacked by Chucky in his car and survives only by shooting the doll.

Chucky meets with John Simonsen, his voodoo instructor from years past, and asks why his gunshot wound bled. John, under torture via voodoo doll, informs him that his body is slowly conforming to that of a human's and that he will soon be trapped in the body if he does not transfer his soul into the body of the first person he revealed himself to, which is Andy. Offhandedly remarking that he will "get to be six years old again," Chucky stabs the voodoo doll and leaves John to die. Karen and Detective Norris, following leads from Charles Lee Ray's case file, find John as he lays dying and receive instructions on how to kill Chucky; although Chucky is a doll, his heart is fully human and vulnerable to fatal injury.

Knowing that Chucky is after him, Andy escapes from the psychiatric unit. Chucky brutally kills the ward's head doctor with an electroshock machine in the process, leaving the authorities to believe Andy killed the doctor while escaping. Mike and Karen rush back to the apartment hoping that Andy is there. Chucky reaches the apartment before them and knocks Andy unconscious with a baseball bat, and proceeds the voodoo ritual to steal his soul. After a prolonged struggle, Chucky is thrown into the fireplace by Karen and despite some coaxing by Chucky, Andy manages to light a match and ignite the fireplace, ultimately setting Chucky ablaze.

Andy and Karen, thinking Chucky is dead, go to help the injured Mike Norris. After Andy gets the first aid kit from under the sink, he discovers Chucky is gone. Very burnt but alive, Chucky chases after Andy and Karen, who barricade themselves in the bedroom; Karen shoots him several times, missing his heart, but scattering his head, an arm and a leg in the hallway. After Norris' partner, Jack Santos, arrives, the scattered doll parts attempt to attack at the instructions of Chucky's screaming, severed head. Karen, remembering John's last words, tells Mike to shoot Chucky in the heart. Norris does so and makes a direct hit, killing Chucky. Chucky then says "Hi I'm Chucky wanna play" before his evil voice fades. Jack then tells Mike "I believe you, but who's going to believe me?". Karen then tells Andy that they are going to the hospital for Mike's wounds. Karen then turns off the bedroom light, with Chucky's remains corned at the wall as the final scene is Andy looking back at Chucky before closing the door as the film ends.