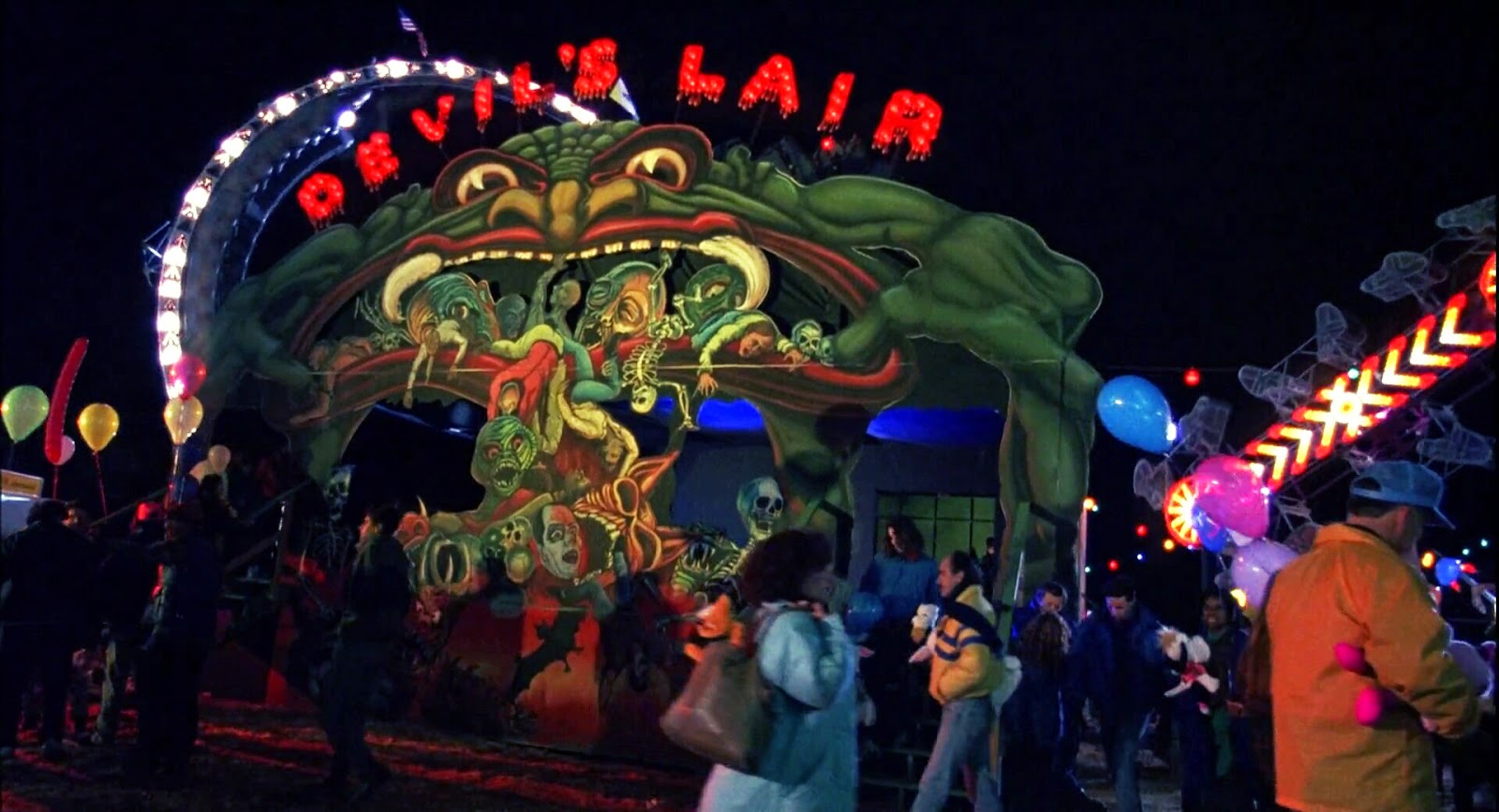 Okay, so let's take a look at the climax of CHILD'S PLAY 3.  It is set at a carnival that's near the military school (Kent Military School) where the film mostly takes place, in an attraction called the Devil's Lair -- basically a fun house that you ride through.  And way better than any one I've ever been through in my life.

But basically, one of of the best endings in the franchise occurs in CHILD'S PLAY 3.  At the Devil's Lair.  In essence, it changed the course of the franchise. 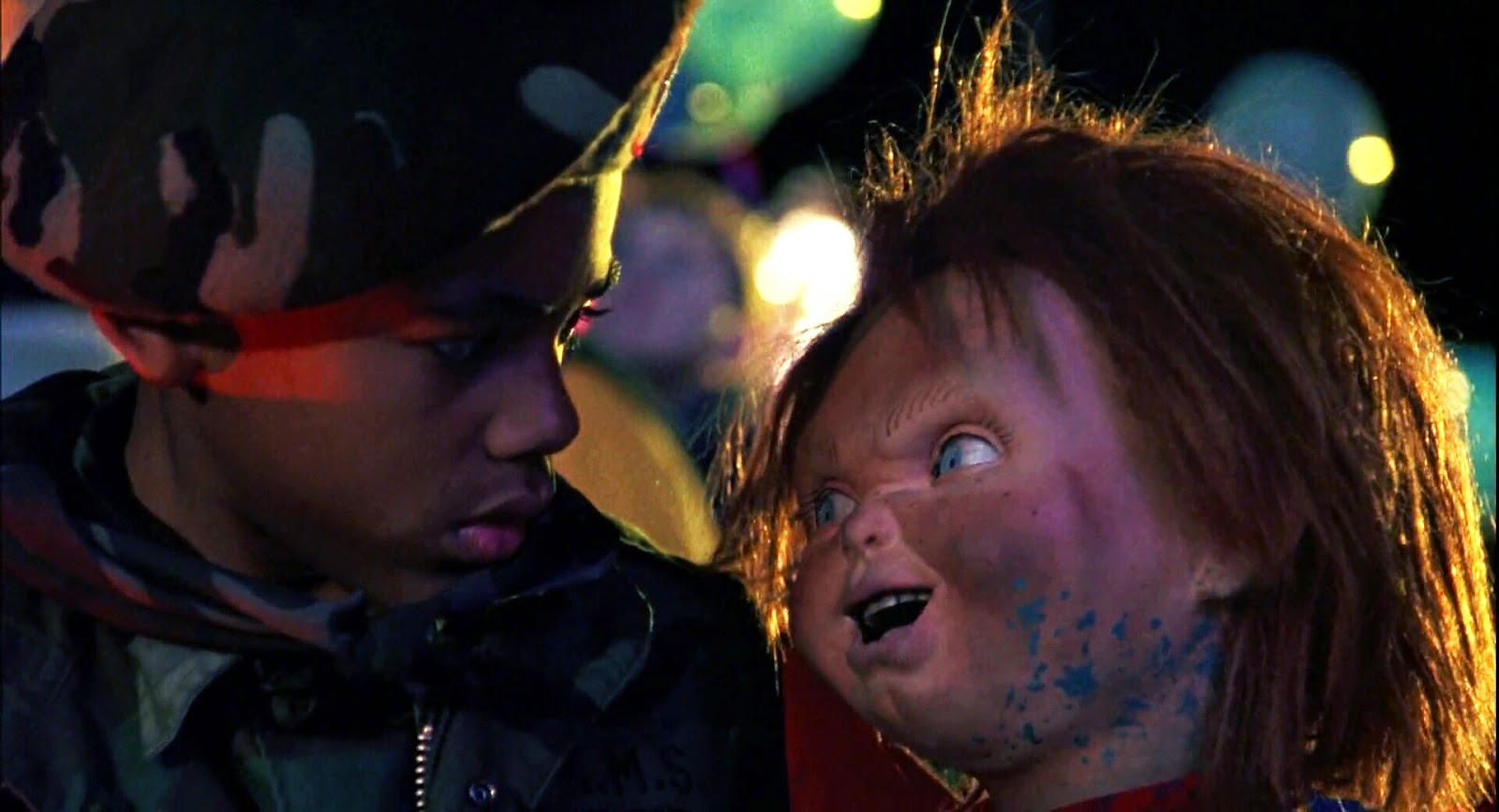 So after the incident at "the old Jeep" where Shelton is accidentally killed by a live round and Whitehurst jumps on a grenade, Tyler takes off towards the carnival with Chucky in pursuit -- and Andy and De Silva follow after.

Shortly after Chucky reconnects with Tyler, he wastes no time looking for a place to complete the chant and transfer his soul into Tyler.

And that's when it happens, Chucky notices the funhouse, aptly named the Devil's Lair.  They enter. 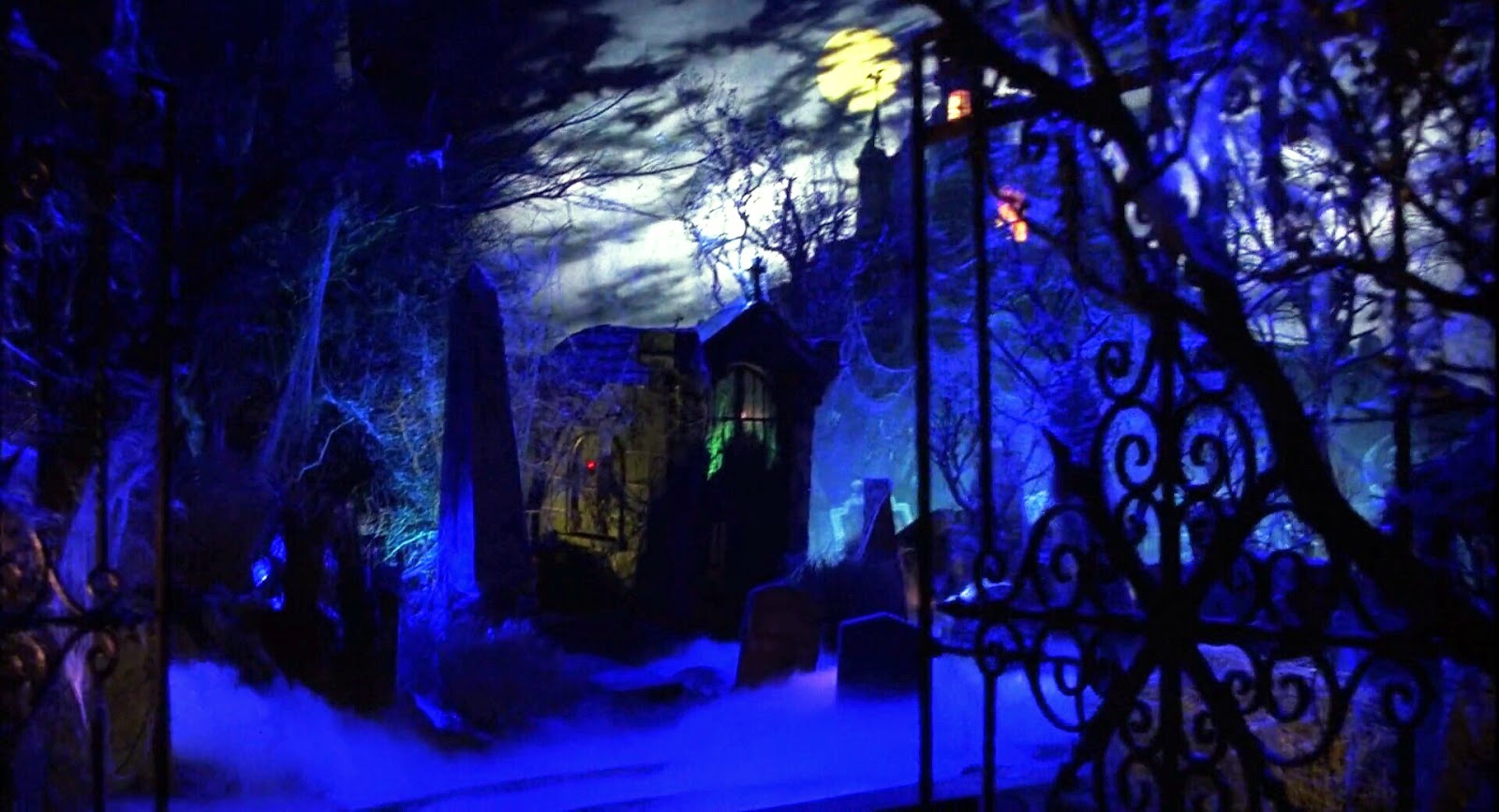 Inside the Devil's Lair, it quickly becomes the coolest place you've never been.  Full of creepy imagery like old cemeteries and filled with fog galore. 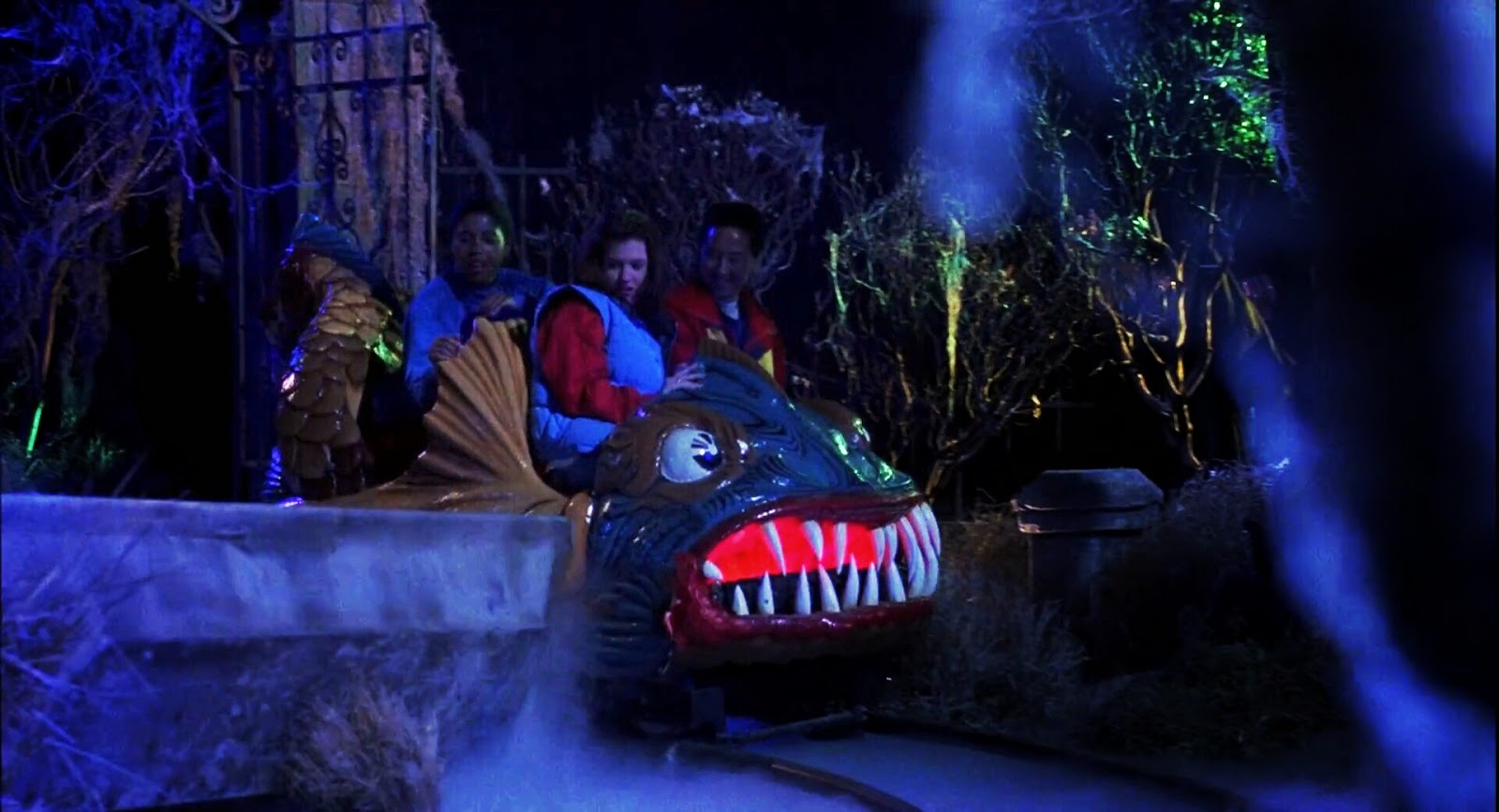 As stated earlier, the customers are the real winners here.  Just check out that awesome ride! 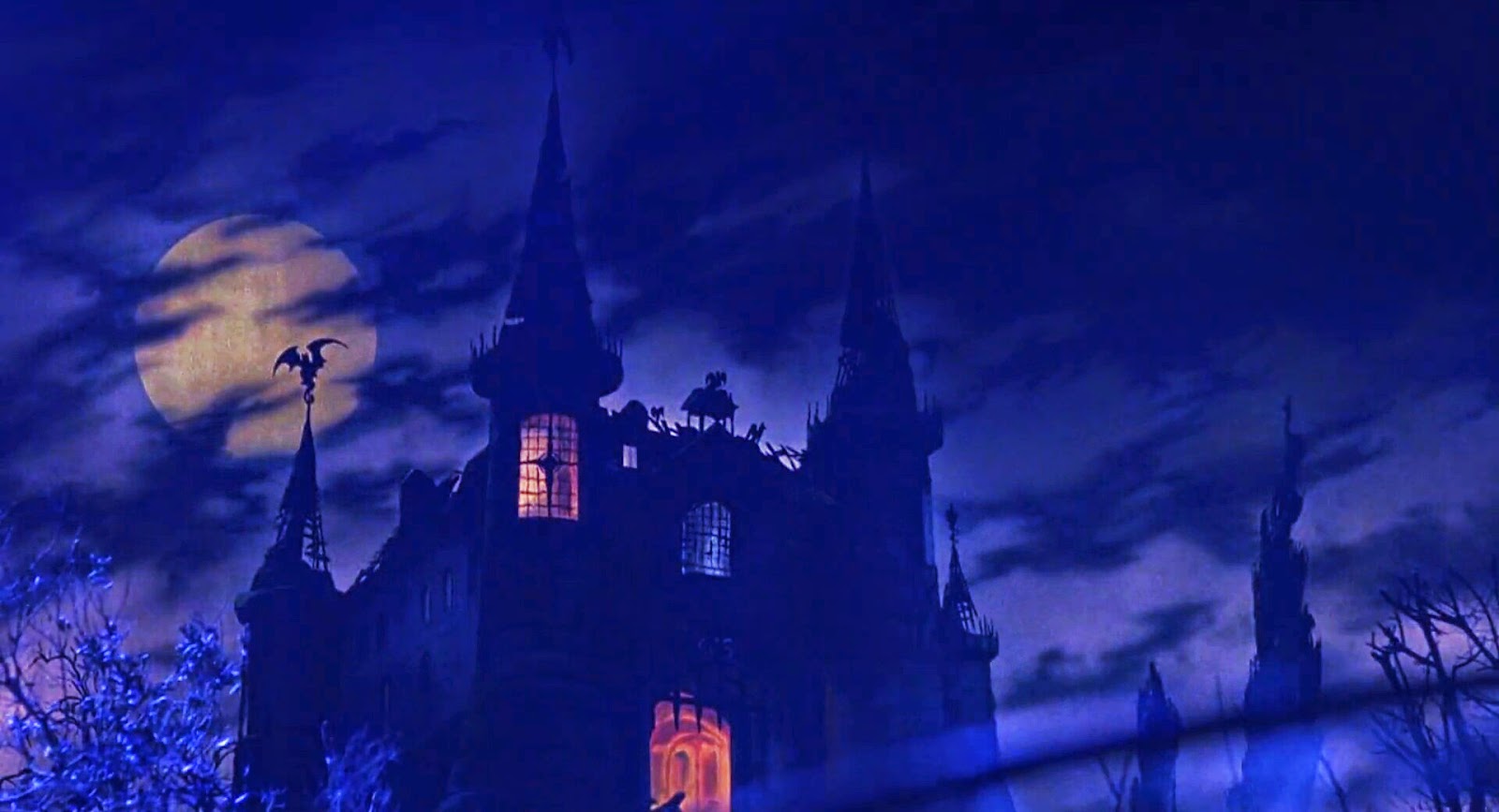 And no funhouse is complete without an awesome creepy haunted mansion facade, complete with sound effects and lighting! 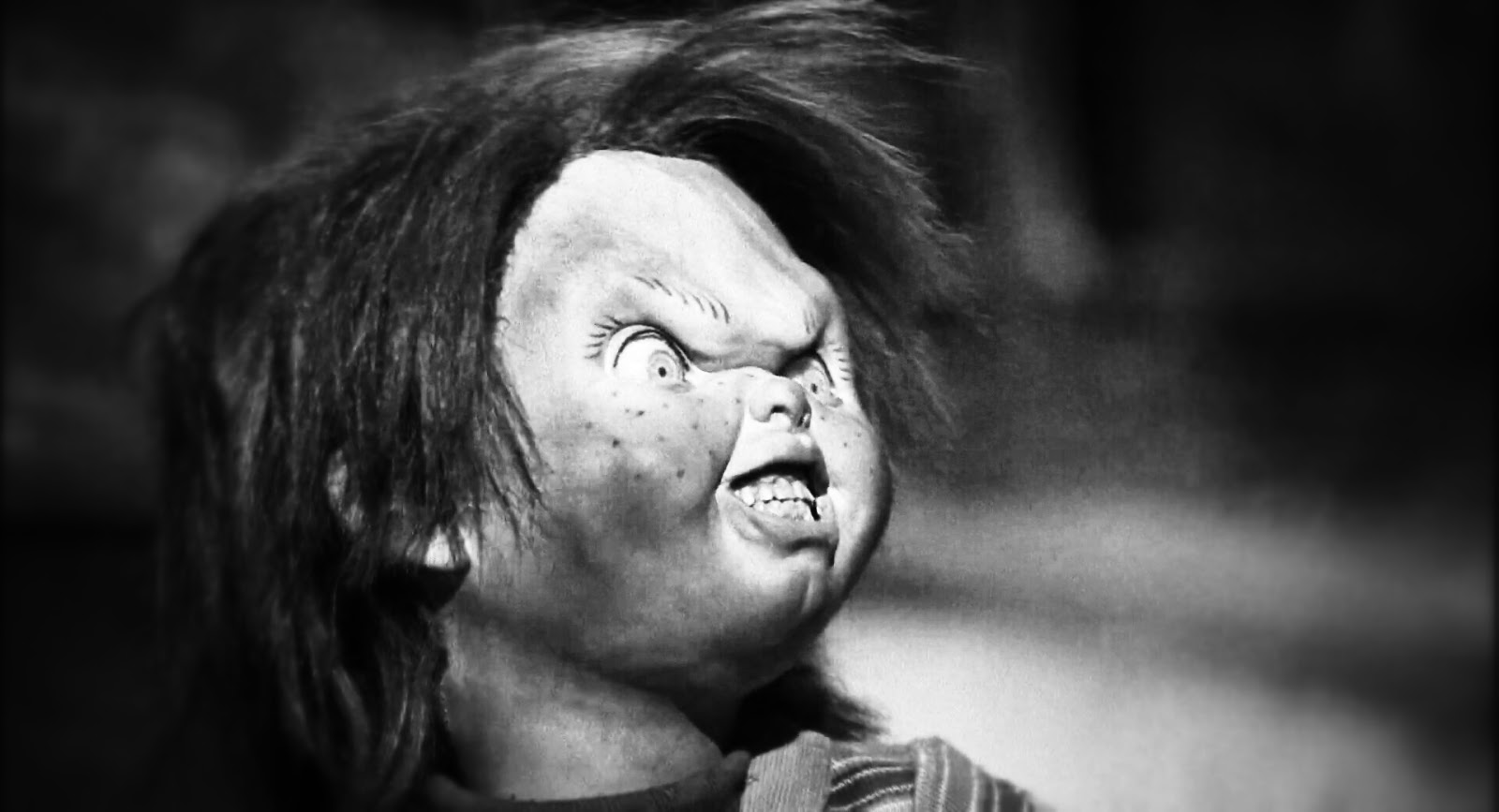 Not mention we get some of the best shots of Chucky ever in this scene.  Just look at that menacing scowl! 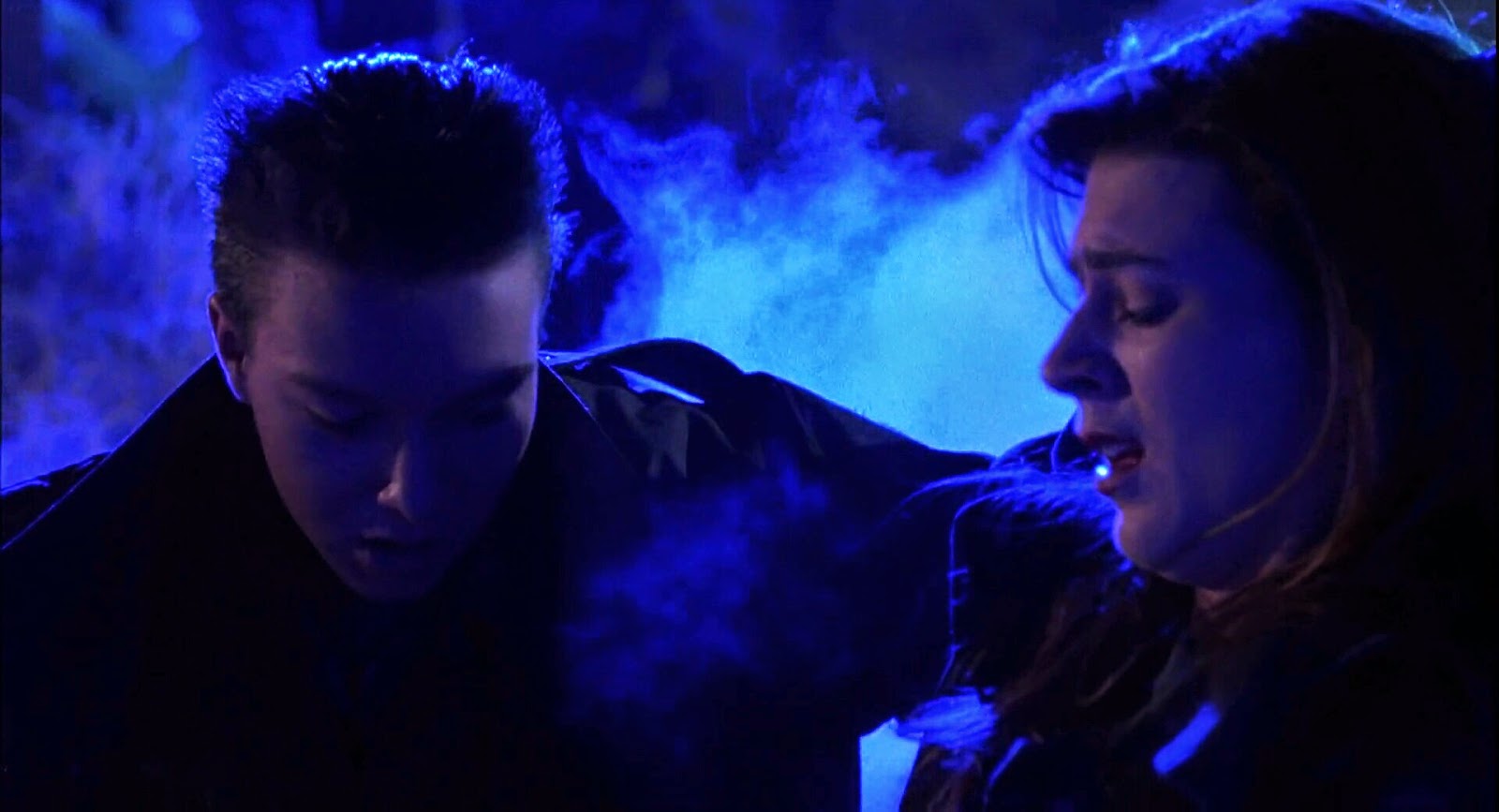 And of course Andy and De Silva arrive, but that doesn't come without its consequences, as De Silva is shot in the leg and basically rendered useless for the remainder of the third act.  Bummer. 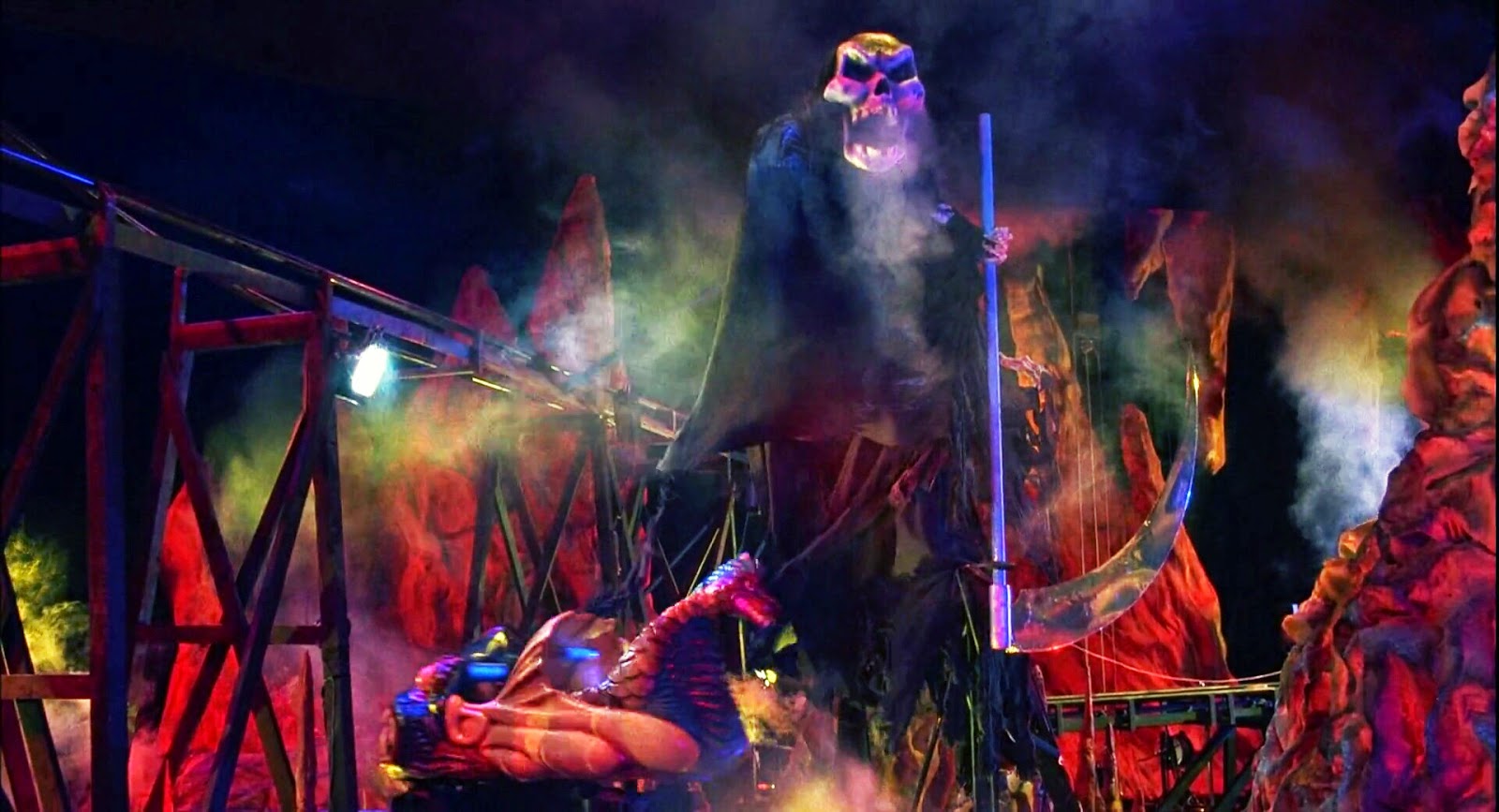 Oh, and look at this guy!  Now, I'd only be showing you this incredibly cool reaper (complete with swinging scythe action!) if it played some sort of part of the plot.  Which it does.  Consider this a foreshadow. 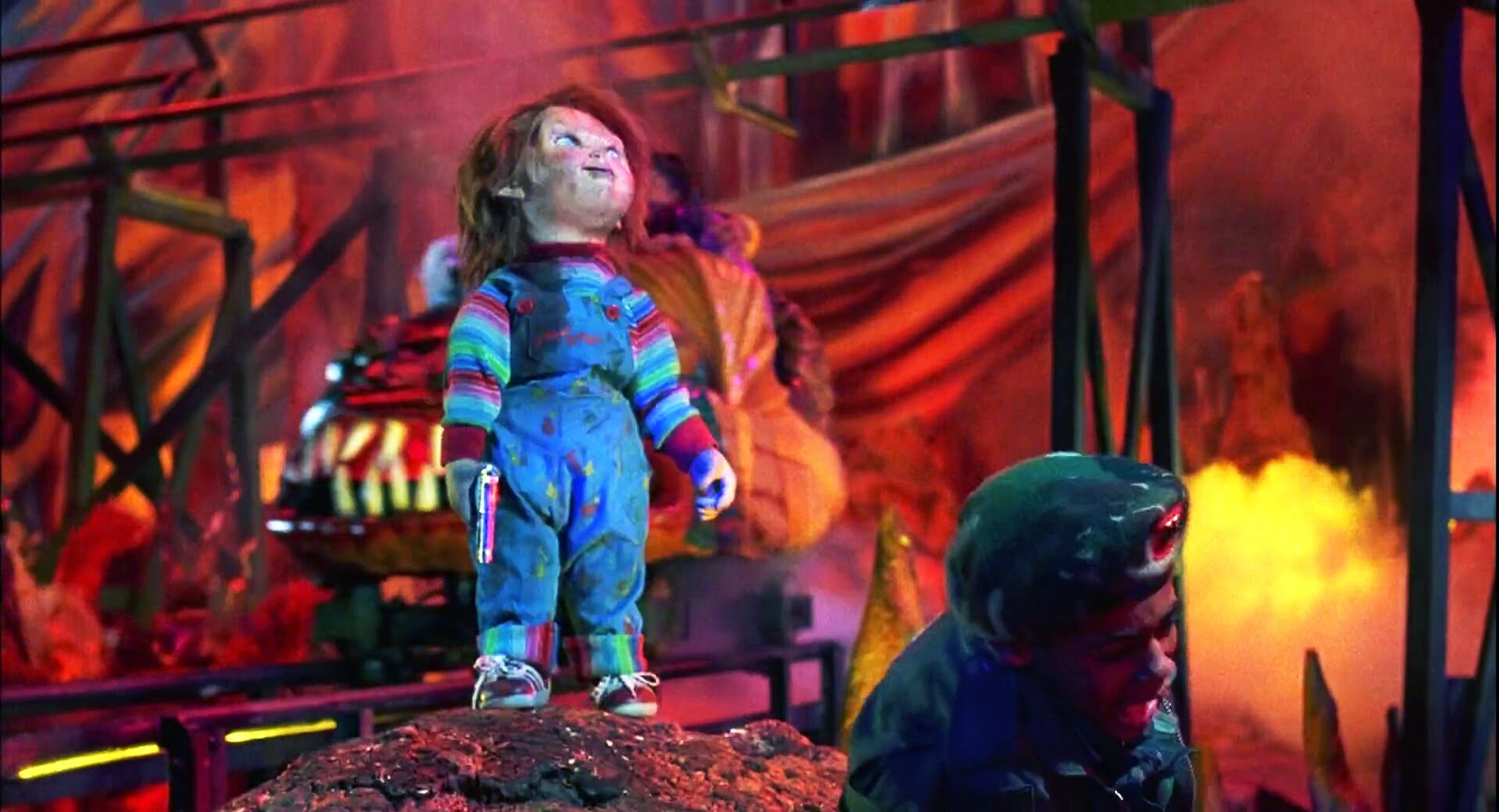 Tyler gets his leg stuck in some weird sink hole thing -- and just went you think Chucky's has him cornered, dead to rights... 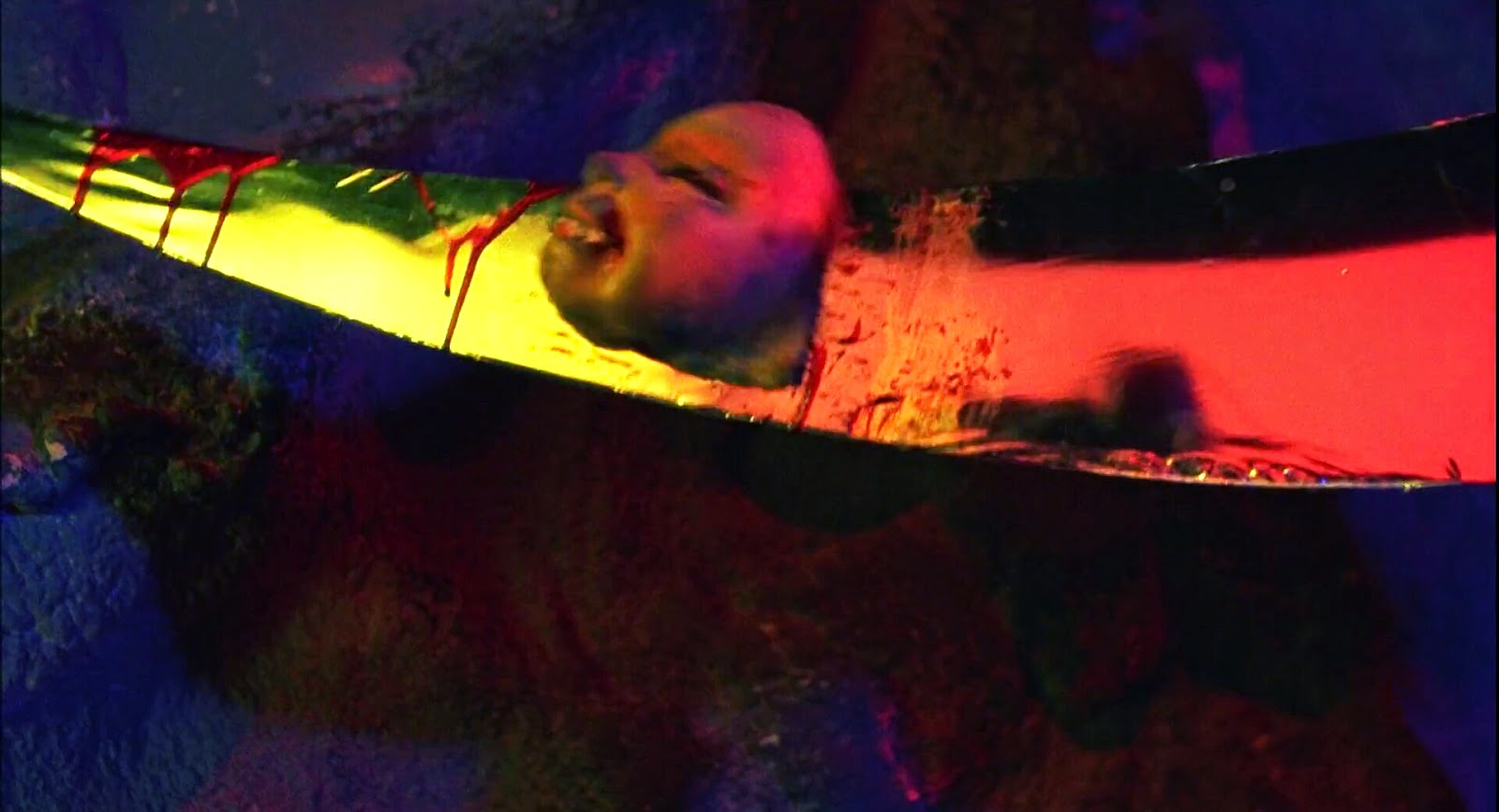 Remember that reaper I foreshadowed a minute ago?  Well let's just say ole Chuckster was standing in the wrong place at the wrong time.  The scythe sliced half of his face off! 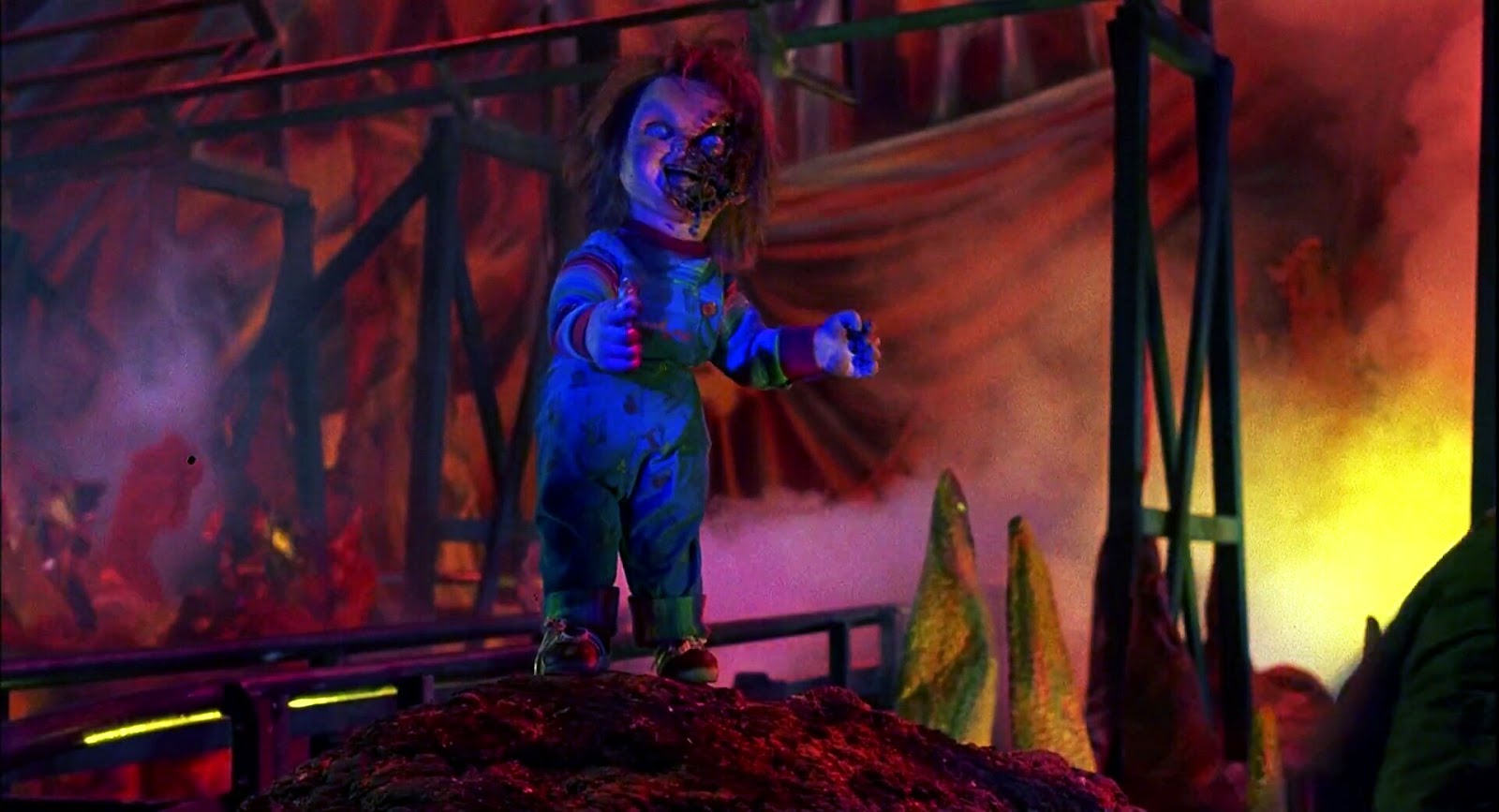 And here we're left with "Two-Face" Chucky.  Pretty badass, if you ask me.  However, he doesn't keep this look long. 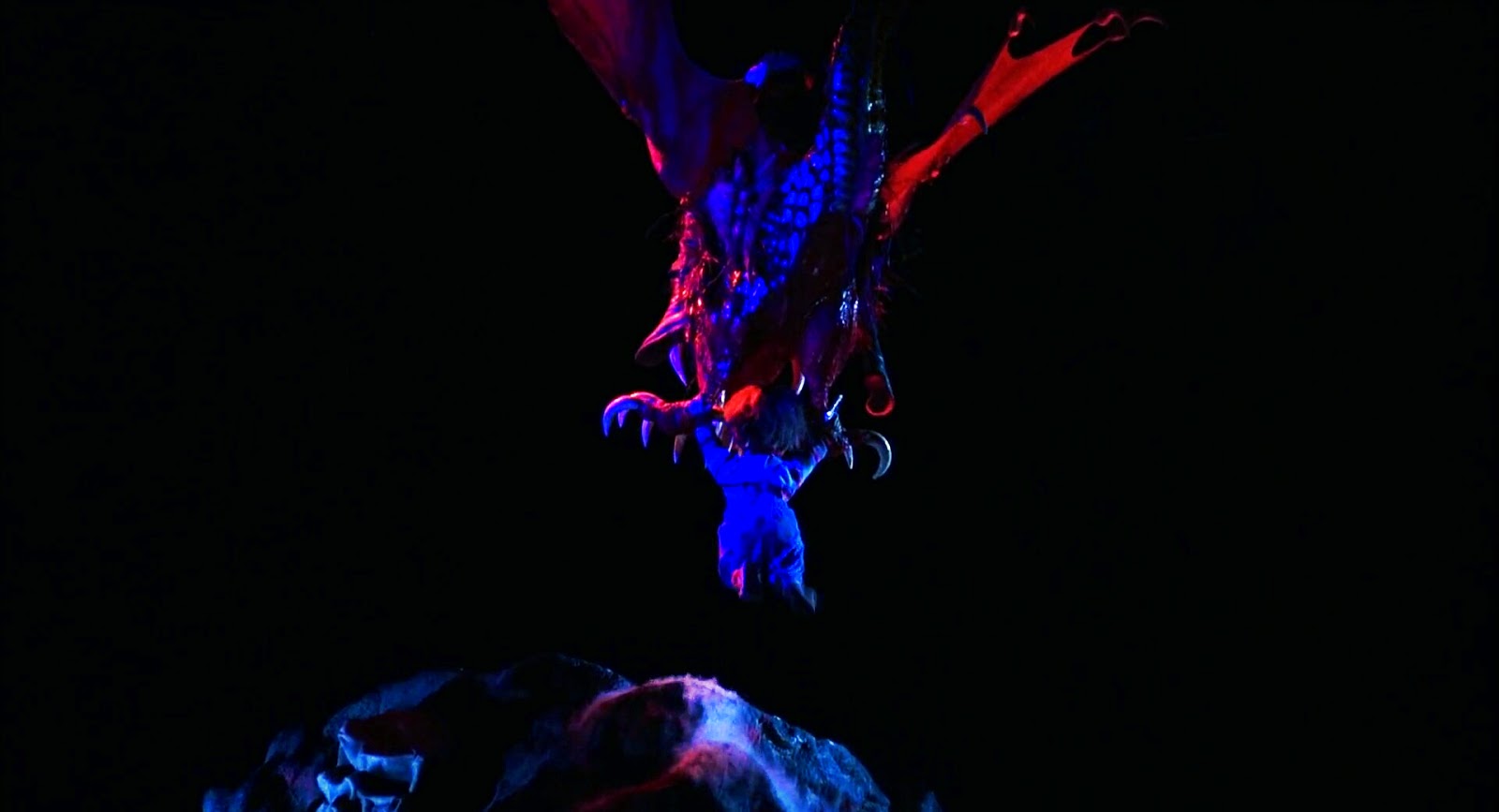 Tyler escapes Chucky by hitching a ride up Skull Mountain.  Too bad he's completely oblivious that Chucky is tagging along below. 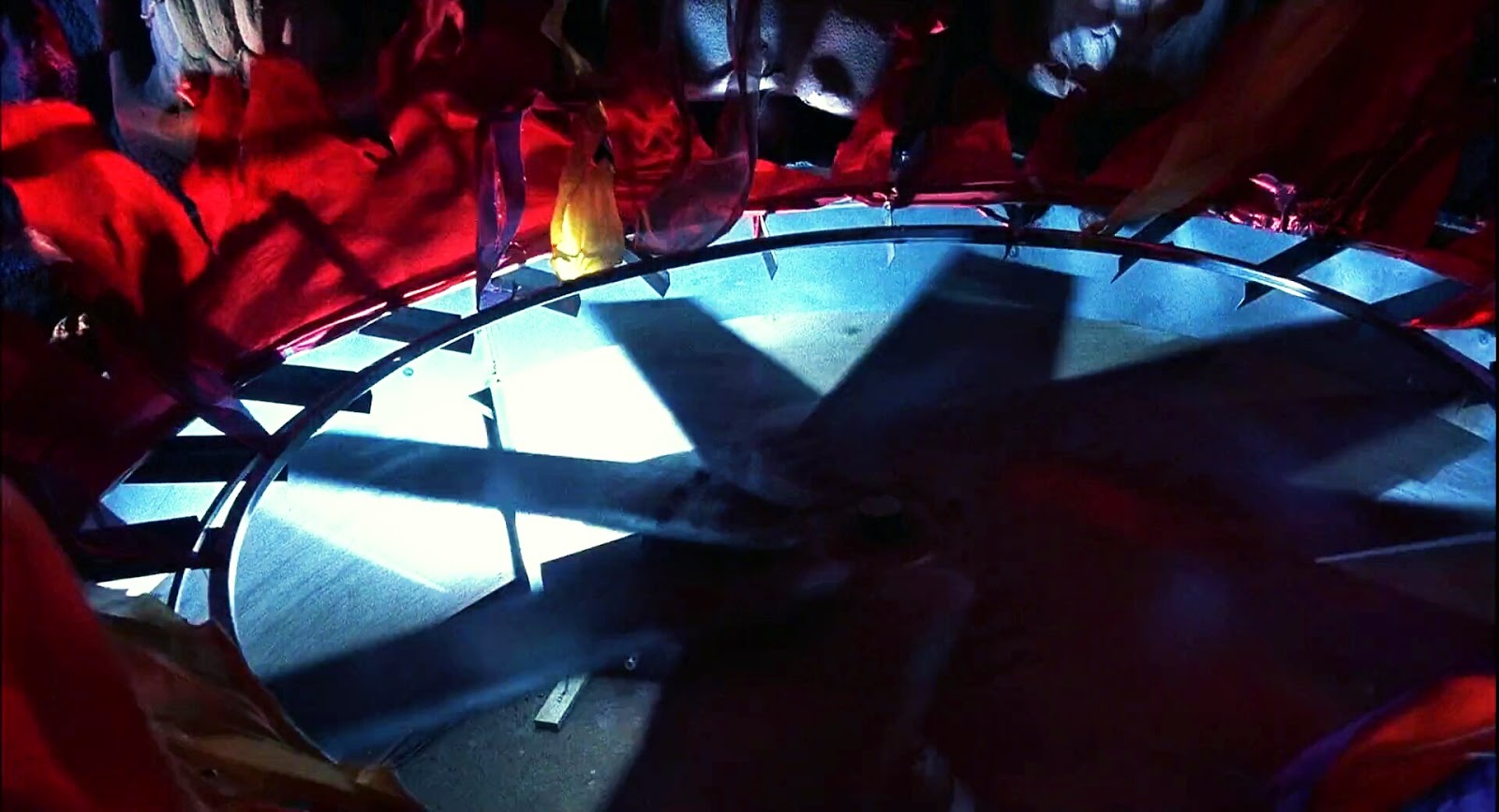 Oh, here's a giant fan that is used for sound and wind in the small haunt.  Yeah, chock this up as foreshadowing, too. 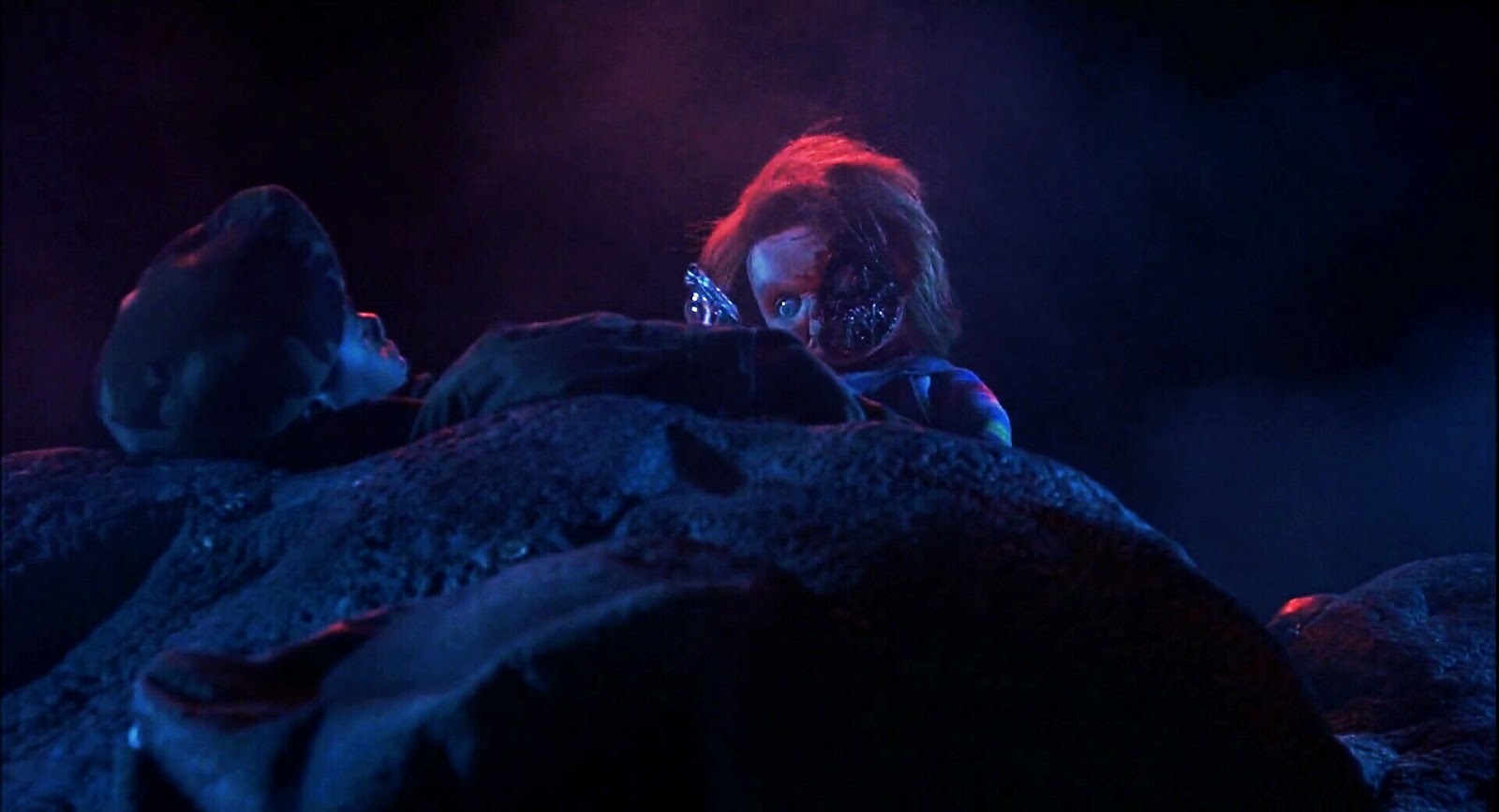 Tyler ends up hitting his head and is knocked unconscious.  So leave it up to the Chuck to take advantage of the situation.  Just the thought harkens back memories of Chucky tying up a sleeping Andy in CHILD'S PLAY 2. 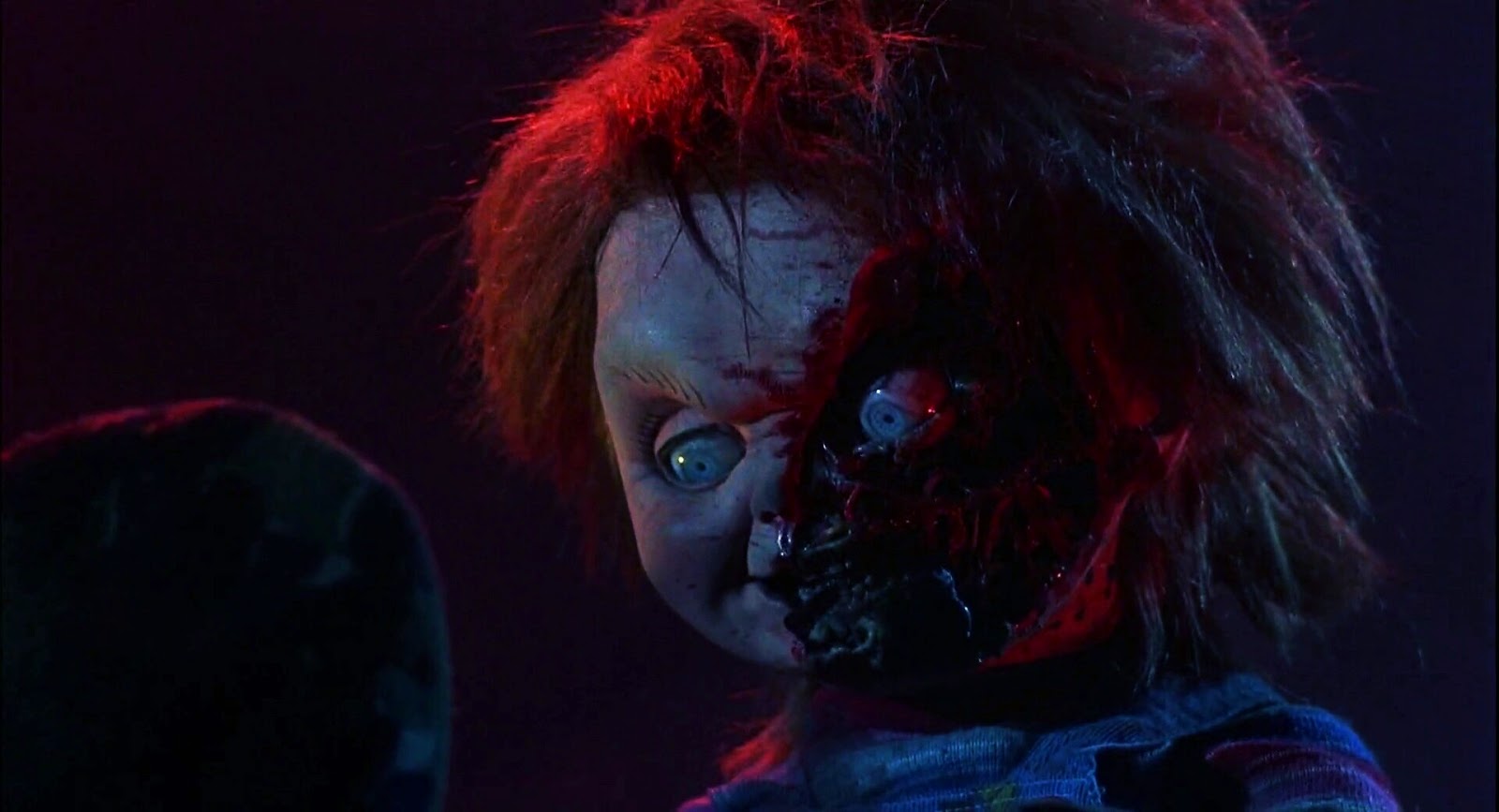 And just for the hell of it, here's a sweet shot of Chucky's exposed face.  Pretty damn cool. 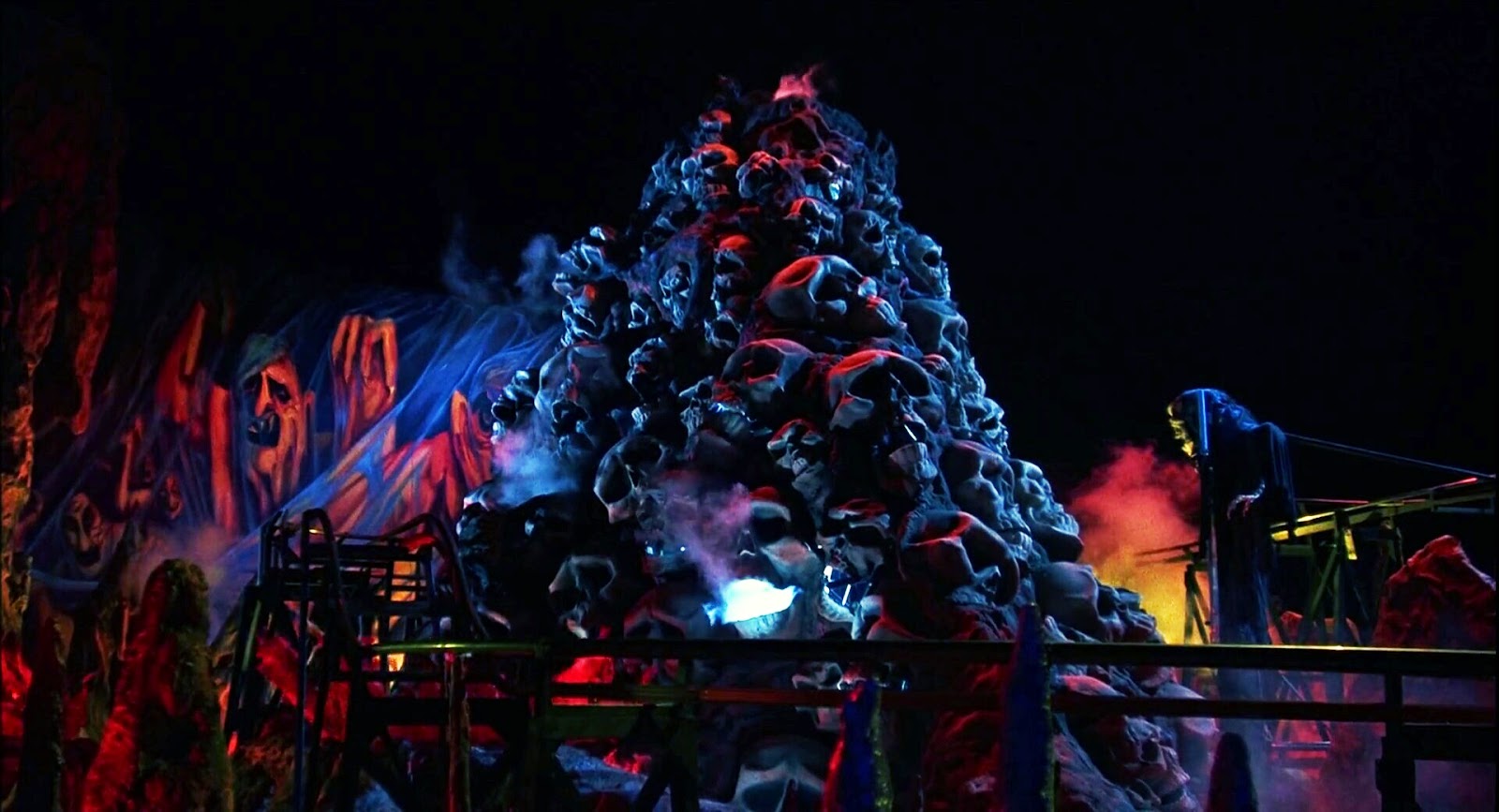 Oh, and here's a sweet look at Skull Mountain, which Chucky and Tyler are atop at the moment.  Kudos to the set design team.  This thing kicks so much ass it's insane. 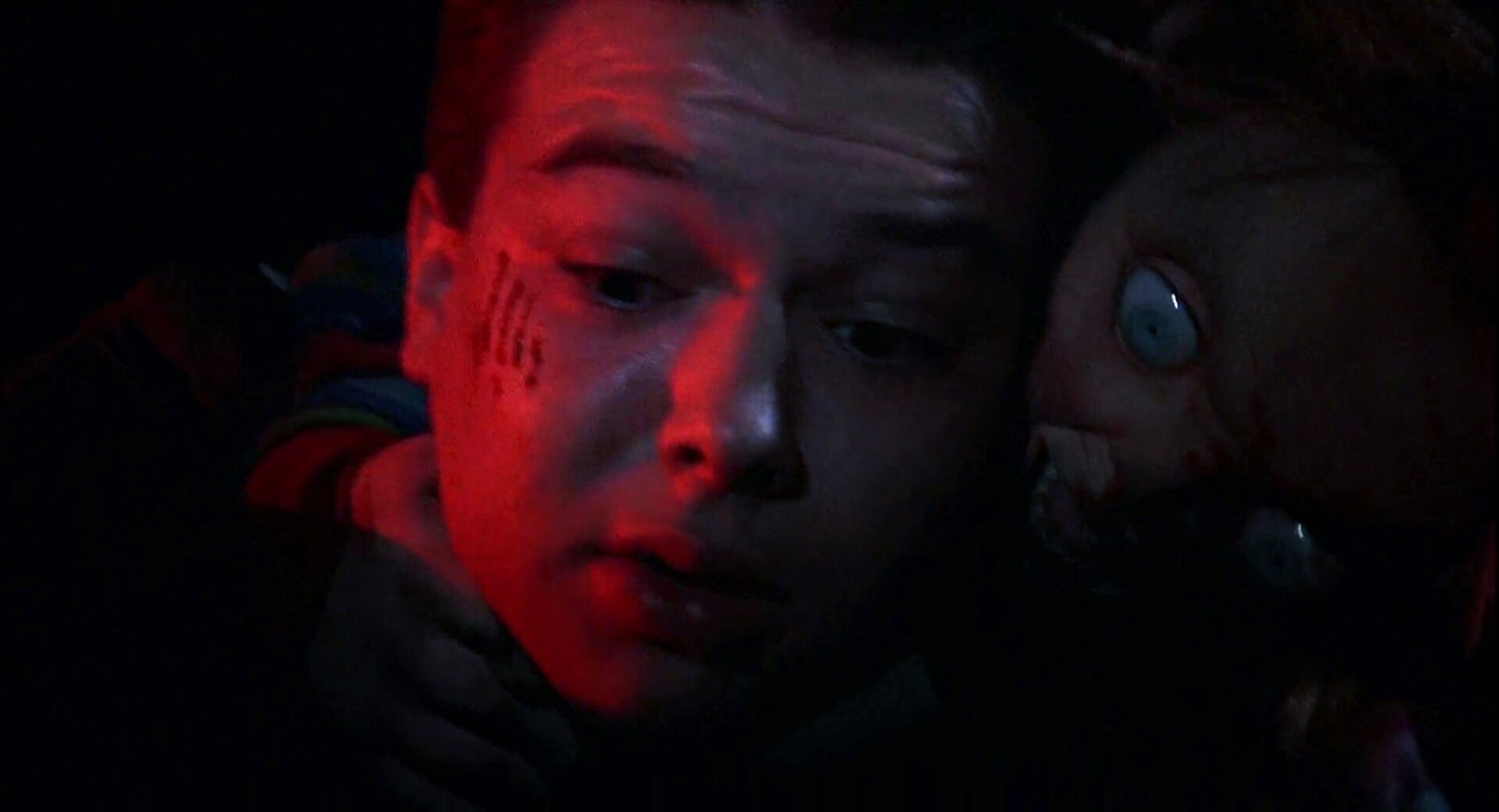 But our hero Andy makes it way to the top of the mountain.  And while trying to save Tyler from falling over the edge, Chucky attacks.  In a moment of desperation, Tyler stretches out and hands Andy a pocket knife from earlier in the film.  Andy quickly cuts off Chucky's hand...and with a quick flick, this happens... 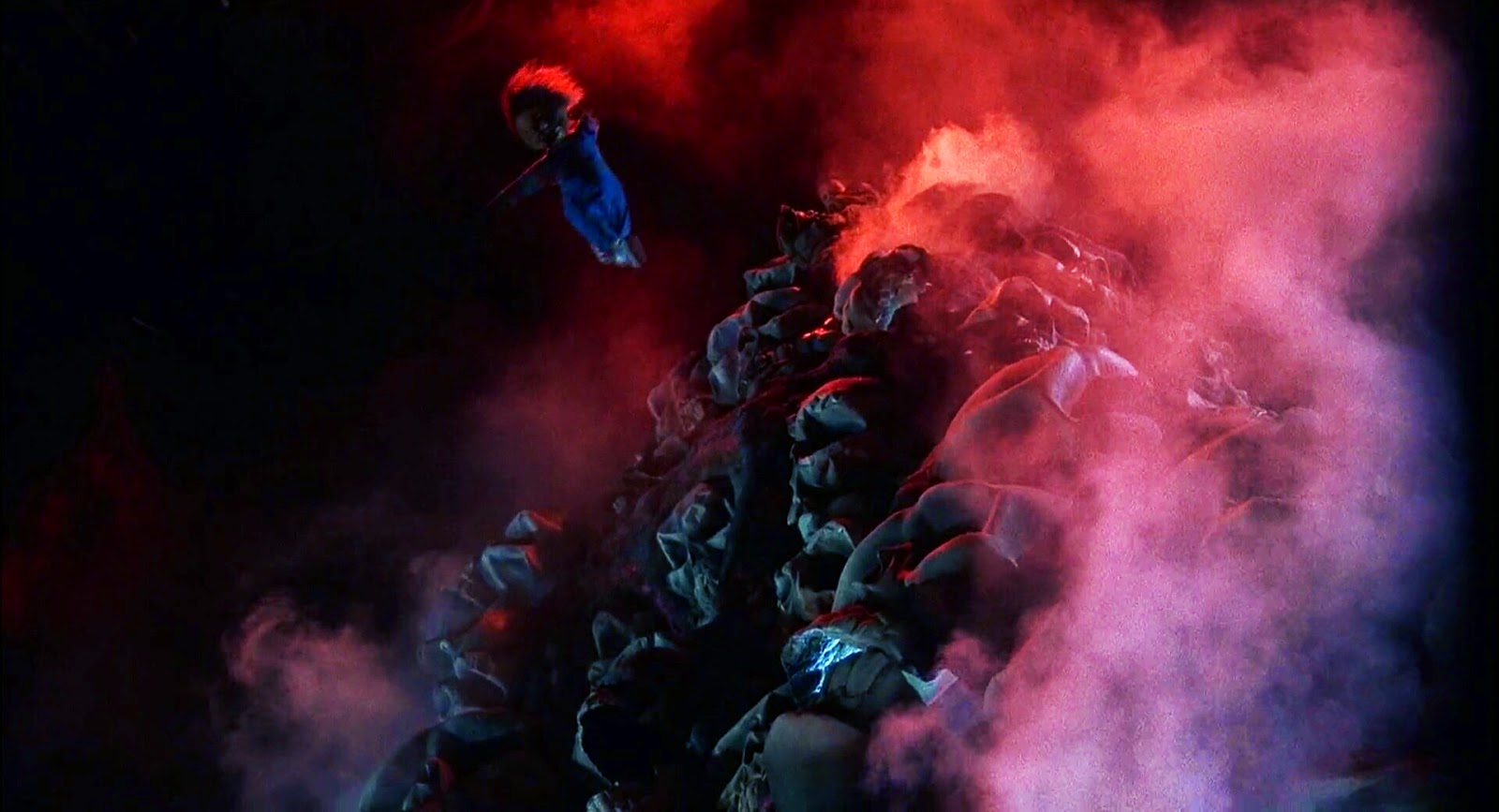 ...Chucky goes flying off Skull Mountain.  And if you're thinking, "Well, that can't possibly kill him."  Um, well... 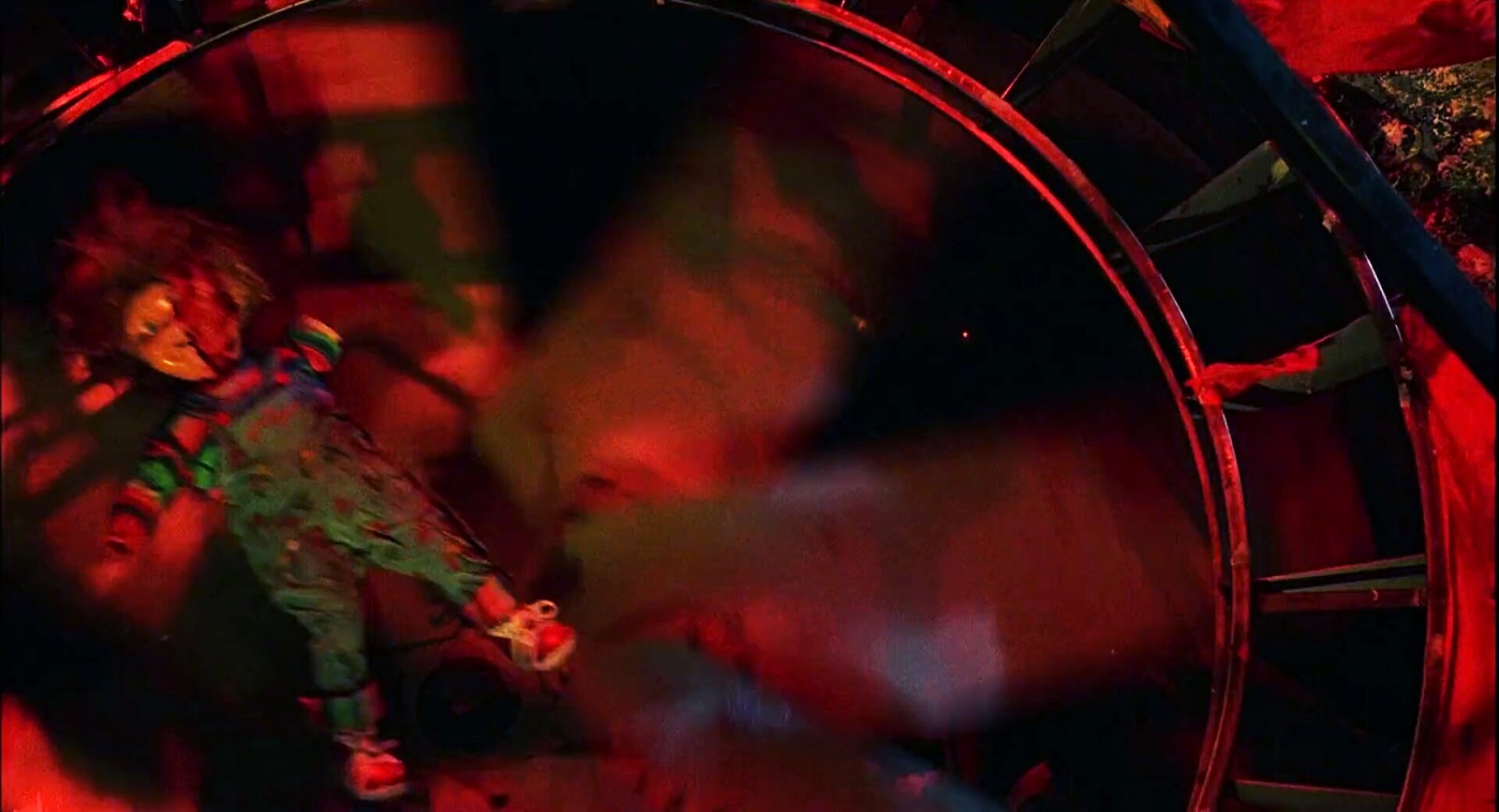 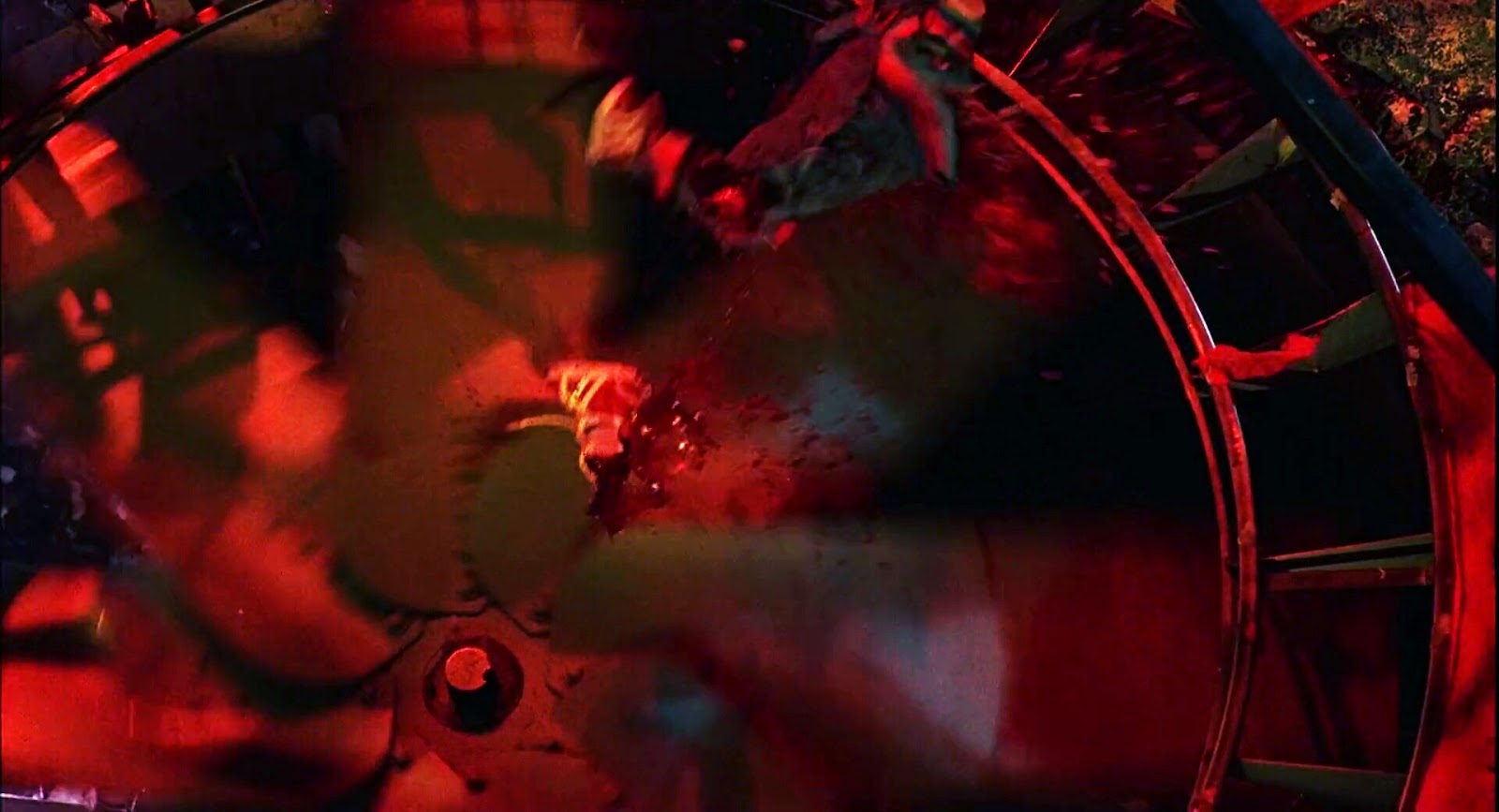 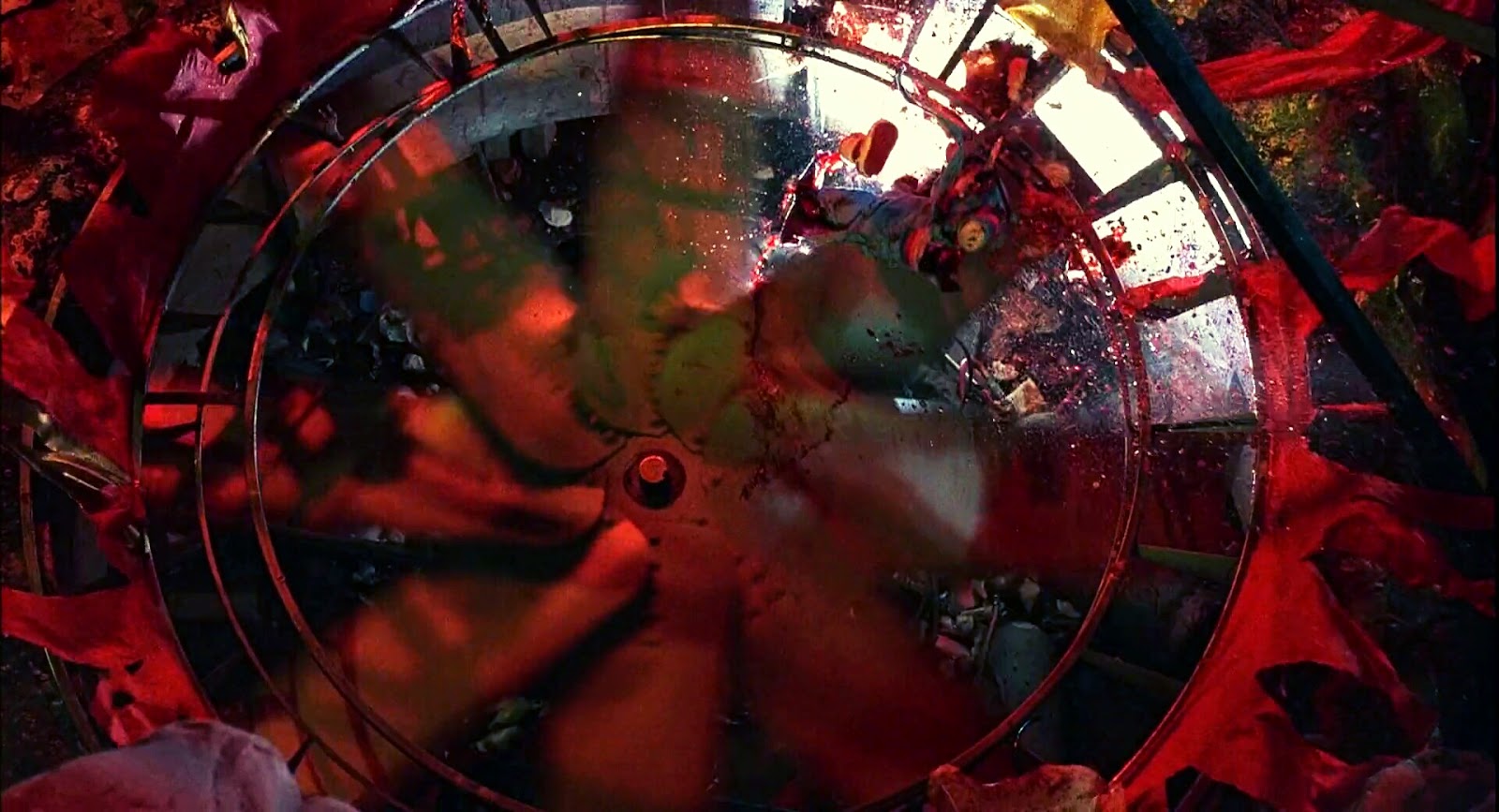 Remember that shot of the giant fan I showed you earlier?  Chucky, meet giant fan.  He's shredded into oblivion.  And for those of you who ask why Chucky has stitches in BRIDE OF CHUCKY, SEED OF CHUCKY and the end of CURSE OF CHUCKY, this scene is why.  It effectively changed the course of the franchise and altered Chucky's look permanently. 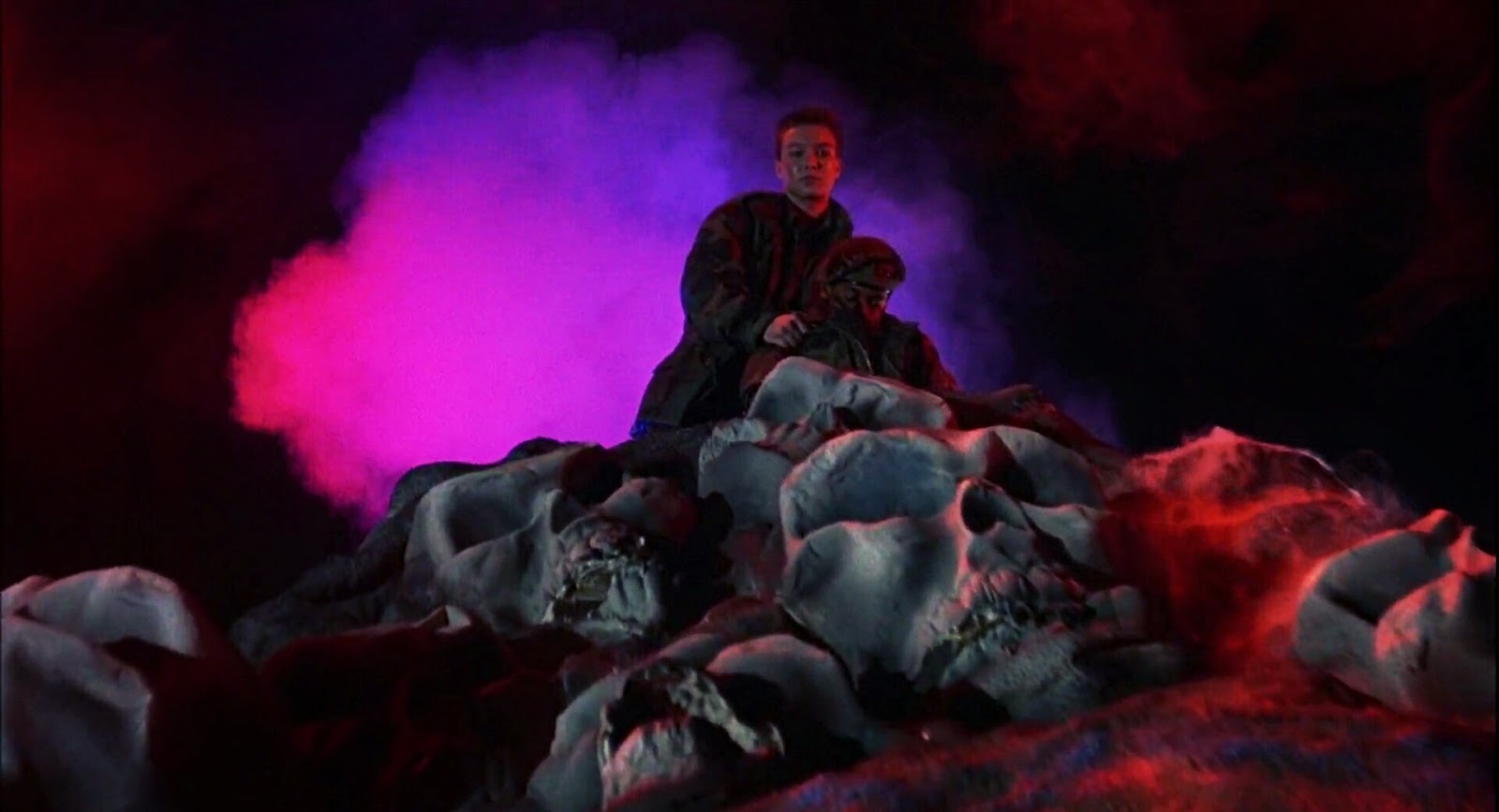 And here we have Andy and Tyler, sitting high atop the mountain, victorious.  Andy has now survived Chucky through three films.  Now that's pretty impressive in the slasher genre.

And there you have it, the final scene(s) of CHILD'S PLAY 3, all taking place at the Devil's Lair, the coolest carnival attraction ever conceived.

Thanks for reading!
Child's Play 3 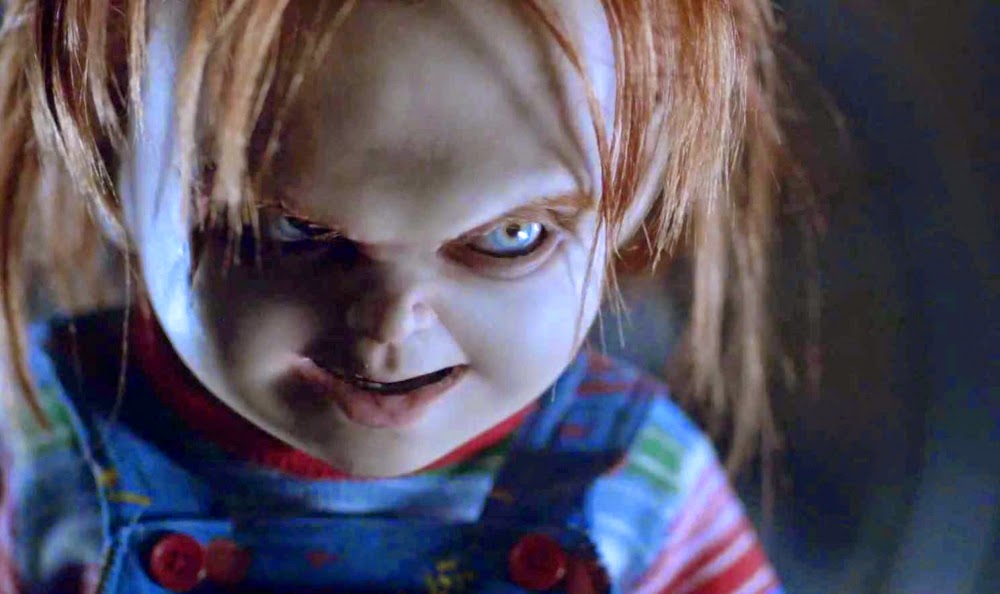